This systematic review of randomised control trials (RCTs) is the first to investigate the role of individual dietary saturated fatty acids (SFAs) replacement on biomarkers of cardiometabolic disease (CMD) risk.

Some local dietary guidelines (e.g., in France) are more specific by advising reduction of the recommended total intakes of individual types of SFAs in order to achieve greater positive impacts on cardiometabolic health.

Some evidence suggests that the sum of dietary lauric, myristic and palmitic acid should not exceed 8% total energy (TE) intake in adults.

This systematic review analyses data from trials which focused on traditional biomarkers of CMD risk such as fasting lipid profiles, markers of inflammation, hemostasis, glycemic control, or metabolic hormones.

The meta-analyses in this work found that the isoenergetic dietary replacement of at least 1.5%TE of palmitic acid with oleic acid or UFA for a duration of at least 14 days had significant beneficial impacts on lipid CMD risk markers in adults. 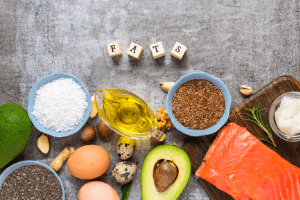 Systematic reviews and meta-analyses like the currently proposed one assess the available data with the aim of helping ground public health recommendations in scientific evidence. However, the current quantitative findings need to be interpreted with caution due to the presence of high statistical heterogeneity and low number of RCTs. Further RCTs designed to investigate different SFAs such as lauric and myristic acids and their impact on other clinical biomarkers of CMD risk are warranted.

Little is known of the impact of individual saturated fatty acids (SFAs) and their isoenergetic substitution with other SFAs or unsaturated fatty acids (UFAs) on the prevention of cardiometabolic disease (CMD). This systematic literature review (POSPERO registration: CRD42020084241) assessed the impact of such dietary substitutions on a range of fasting CMD risk markers, including lipid profile, markers of glycemic control and inflammation, and metabolic hormone concentrations. Eligible randomized controlled trials (RCTs) investigated the effect of isoenergetic replacements of individual dietary SFAs for at least 14 days on one or more CMD risk markers in humans. Searches of PubMed, Embase, Scopus and Cochrane CENTRAL databases on 14th February 2021 identified 44 RCTs conducted in participants aged 39.9y (SD 15.2). Studies’ risk of bias was assessed using the Cochrane Risk of Bias tool 2.0 for RCTs. Random-effect meta-analyses assessed the effect of at least three similar dietary substitutions on the same CMD risk marker. Other dietary interventions were described in qualitative syntheses. We observed reductions in low-density lipoprotein cholesterol concentrations after the replacement of palmitic acid (C16:0) with UFA (-0.36 mmol/L, 95%CI [-0.50, -0.21], I2 = 96.0%, n = 18 RCTs) or oleic acid (C18:1) (-0.16 mmol/L, 95% CI [-0.28, -0.03], I2 = 89.6%, n = 9 RCTs), with a similar impact on total cholesterol and apolipoprotein B concentrations. No effects on other CMD risk markers, including high-density lipoprotein cholesterol, triacylglycerol, glucose, insulin, or C-reactive protein concentrations, were evident. Similarly, we found no evidence of a benefit from replacing dietary stearic acid with UFA on CMD risk markers (n = 4 RCTs). In conclusion, the impact of replacing dietary palmitic acid with UFA on lipid biomarkers is aligned with current public health recommendations. However, due to the high heterogeneity and limited studies, relationships between all individual SFAs and biomarkers of cardiometabolic health need further confirmation from RCTs.

Number of full-text studies reviewed as part of this analysis.
Total energy intake recommended from saturated fatty acids
%
of less.
Number of markers for health effects screened including cardiometabolic and inflamation markers.

A more complete picture of the impact of dietary saturated fatty acids on metabolic health status would greatly contribute to the improvement of public health guidelines for the prevention of cardiometabolic diseases.

Scroll Up
Manage Cookie Consent
This site uses cookies to provide you with a personalized browsing experience. By clicking “I Agree” or continuing to use the site you agree to allow cookies to be placed and accept the terms set out in our [Privacy Notice]. Please read the Privacy Notice for more information on how we handle information collected from users and how you can control the use of such information.
Manage options Manage services Manage vendors Read more about these purposes
View preferences
{title} {title} {title}